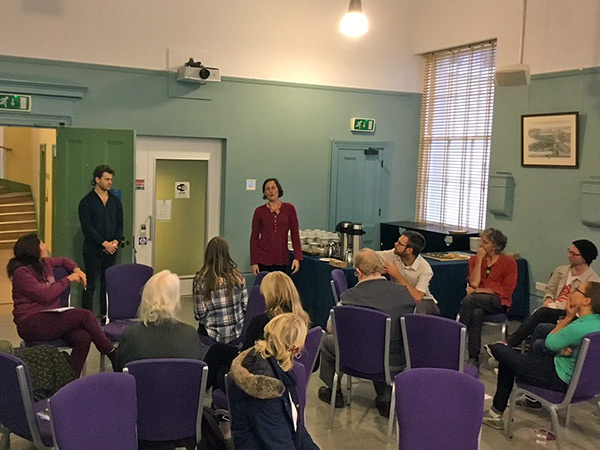 On the evening of Tuesday 18th September Devonport Guildhall hosted an evening event at which Lynne and Elliot facilitated an informal but structured workshop addressing four key questions around food, the countryside and the future, followed by a question and answer session.

The following day, I took Elliot on a tour of some of Plymouth’s leading and emerging food projects, including: Ernesettle and Southway Community Orchards; the Whitleigh Big Local area; the Beacon Growing Project; Dig for Devonport; Grow Stonehouse; Union Corner; Nudge Community Builders’ Clipper Project; Plymouth Market; and the Fish Quay.  Amongst a host of  other topics, the tour also highlighted: The forthcoming Thrive Plymouth Year 5 food and nutrition focus; the Poole Farm project; Plymouth Community Homes’ work around food and community; the food work of the city’s Higher Education Institutions; CATERed’s award-winning work in schools; Food Plymouth’s aspiration to create a multi-functional food hub for the city; Billy Ruffian’s Brewery; Inter:Change and Plymouth’s unique setting of having a national park on it’s northern boundary and potentially a national marine park on its southern edge.

Huge thanks to the dozens of people who engaged in the evening event and supported all the visits during the daytime tour.

The Commission’s interim report is due out later in the Autumn.  We will bring you news of this – and hopefully another engagement event opportunity – in future editions of this e-bulletin.