Parents want to see an end to the use of popular children’s characters and brand mascots on food and drink high in fat, salt and sugar, according to a new report Pester Power or Parent Power? published by the Children’s Food Campaign and Food Active. 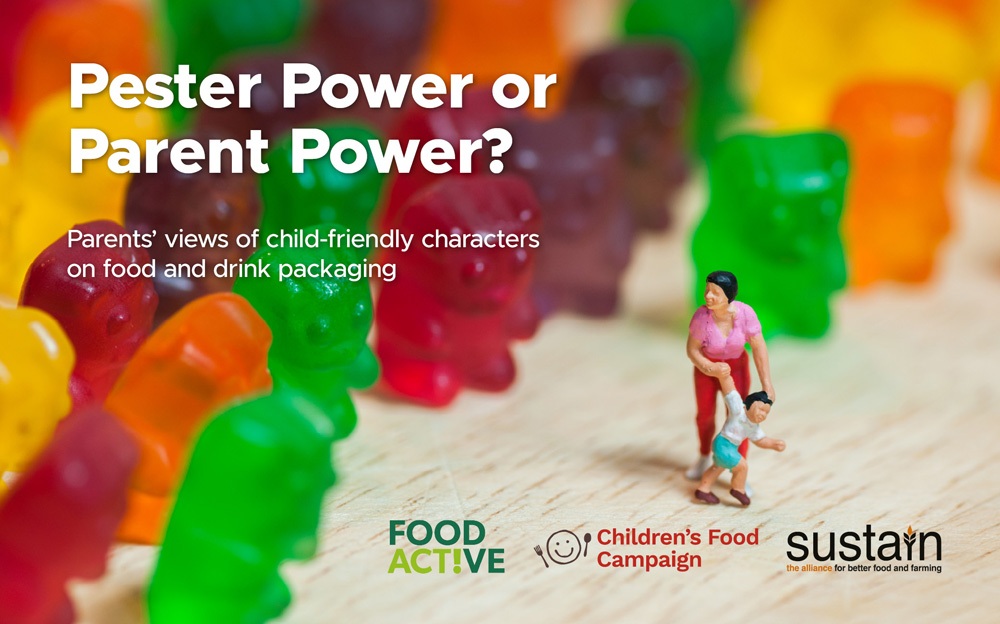 The Pester Power or Parent Power? report is based on research with 942 parents of children across the UK conducted by the Children’s Food Campaign and Food Active, with support from the Guy’s and St Thomas’ Charity. The campaign organisations are calling on the Government to consider regulating the use of child-friendly characters on less healthy food and drink packaging as part of the next stages of its childhood obesity action plan.

Parents reported how popular characters from TV and films have a powerful effect on the food and drink their children notice and ask for. Whilst parents do not always give into children’s pestering, many agreed that using these characters often makes their parenting job more difficult, especially if they take their children shopping with them.

Rachel Allen, a mother of two in London, says:

“It would be really helpful if children’s food marketing (i.e. use of characters) could be swayed towards healthy foods (i.e. fruit, vegetables, no added sugar yogurts etc). It is really not helpful when you end up having a battle of wills in the supermarket over Paw Patrol chocolate sticks.”

Whilst parents are most likely to prioritise price, brand and perceived health of products when shopping for themselves, many reported that the use of characters is the most powerful marketing tool for attracting their children’s attention towards specific products or brands, and can divert the choices they make as a parent.

Lindsey Stephenson, a mother of two in the North West, says:

“I took part in this survey because I felt it was important that as a parent, my voice was heard. Those who are allowing manufacturers and big brands to market to children should know the pressure they are putting parents under. Healthy choices need to be easy choices, but it’s a minefield out there. I want a little more understanding and empathy – so many decisions are made with no idea of what it’s like to go around Asda with a screaming child, all because there was a cartoon character on a rice crispy bar.”

The report notes that whilst advertising rules currently prohibit the targetting of children through the use of popular cartoon characters or celebrities in advertising for products that are high in fat, salt and/or sugar (HFSS), there is still a major loophole in that regulations which do not apply to food and drink packaging. Earlier this year, supermarkets Lidl and Asda joined Tesco and Sainsbury’s in committing to the removal of child-friendly cartoon characters from breakfast cereal high in sugar. Both the Parliamentary Health Select Committee and the former Chief Medical Officer have previously called for the use of child-friendly characters on HFSS foods to be prohibited.

“Parents are clear – whether it’s Peppa Pig or Paw Patrol, Disney or Star Wars, or the brands’ own cartoon mascots, they have no place on the packaging of unhealthy food and drink. They confuse and undermine parents in trying to feed a healthy diet to their families, and cause unnecessary tension.  Whilst there’s been some progress on breakfast cereals in some supermarkets, it’s not nearly enough. This is why we are calling on the Government to consider regulations to restrict their use to healthier food and drink only.“

The Pester Power or Parent Power? report is released as the Government prepares to launch a new drive to tackle both adult and child obesity, especially in light of evidence of increased risk of negative outcomes if infected with viruses like Covid-19 for those affected by overweight and diet-related diseases such as Type2 diabetes or heart disease.  The report contains a series of recommendations for both Government and industry, which include refocusing any use of children’s characters towards healthier food and drink, as well as making front-of-pack colour-coded nutritional labelling mandatory. The organisations are also calling for products high in fat, salt and sugar to be removed from children’s eye-level on shelves and from store entrances, aisle ends and checkout areas where children are most likely to see them.

Alex Holt of Food Active, a programme run by the Health Equalities Group says, “We hope the Government takes note of this important collection of voices from parents across the UK, clearly stating that the use of cartoon characters on unhealthy food is a problem for them. Parents are acutely aware of the impact that these marketing tactics are having on their children’s food preferences and brand awareness, and the difficulties they present especially in light of the difficulties some already face in feeding their child/ren well.”

In 2019, research conducted by Action on Sugar and Salt with the Children’s Food Campaign revealed 250 food and drink products carrying cartoon animations on pack were high in fat, saturated fat, sugar and/or salt (HFSS).

Zoe Davies of Action on Salt and Sugar, who conducted the product research in 2019, says, “Our shocking research showed over half of all products carrying child-friendly characters were so unhealthy they would not be permitted to advertise during kids’ TV programmes. This new research just goes to show the effect this duplicitous use of cartoon characters has on parents and children alike, and why we need to implement the comprehensive Childhood Obesity Plans without delay to close these loopholes.”

The new report and research programme on unhealthy food marketing is supported by the Guy’s and St Thomas Charity as part of a three-year partnership with the Children’s Food Campaign to develop new policy levers to build a healthier food environment for children.

Sarah Hickey, Childhood Obesity Programme Director at Guy’s and St Thomas’ Charity, says, “Parents have had enough of their children being flooded with unhealthy options. It’s time to put nutritious food centre stage, and for government and businesses to prioritise the health of our young people. We are seeing a shift towards a healthier food infrastructure from some supermarket own brands, but many of the big name brands are still not putting children’s health first. This report shows that families want to see real change, and that their brand loyalty might depend on it.”