A new Vegan supermarket will be opening its doors in Plymouth on Saturday 2nd March 2019. The outlet, named the Plymouth Vegan Company, will be selling all your favourite vegan snacks, ingredients, cosmetics, cleaning materials and, once they have obtained their licence, alcohol in a couple of months.
Owners Jo Lines, Sophie Lines, Chris Harris and Charlotte Harris came up with the idea in December 2018 with the view to create a one stop vegan shop where customers can park outside and a store in which customers can also voice their opinion on what they want in the shop.
Chris and Charlotte Harris previously used the store which was called House of Harris, and based at Faraday Mill in Plymouth, as a gift store predominantly selling Yankee Candles. They have now relocated this stock to their Exeter store to make space for the new Vegan stock. Jo and Sophie Lines… who are vegans themselves are over the moon to be opening their dream store. Sophie said:

“I get very frustrated having to visit various shops and supermarkets, so it was our dream to create a one stop shop that is easily accessible”. Sophie’s mum, Jo Lines, added “The idea was to create a mini-supermarket stocking health food, sweets, snacks, protein bars, non-dairy drinks, fridge and freezer products, suggestions boards – it’s a one stop shop” 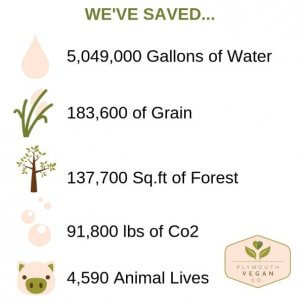 According to the Vegan Calculator since going Vegan the owners are proud to say they have saved over 4500 animals lives.
The rise in veganism can be linked to many reasons including health, ethical and dietary.
Chris says
“We will also be having a gluten free range as we’ve noticed the rise in health-related reasons for turning vegan.”