Fairtrade Fortnight 2022 and beyond: how to get involved 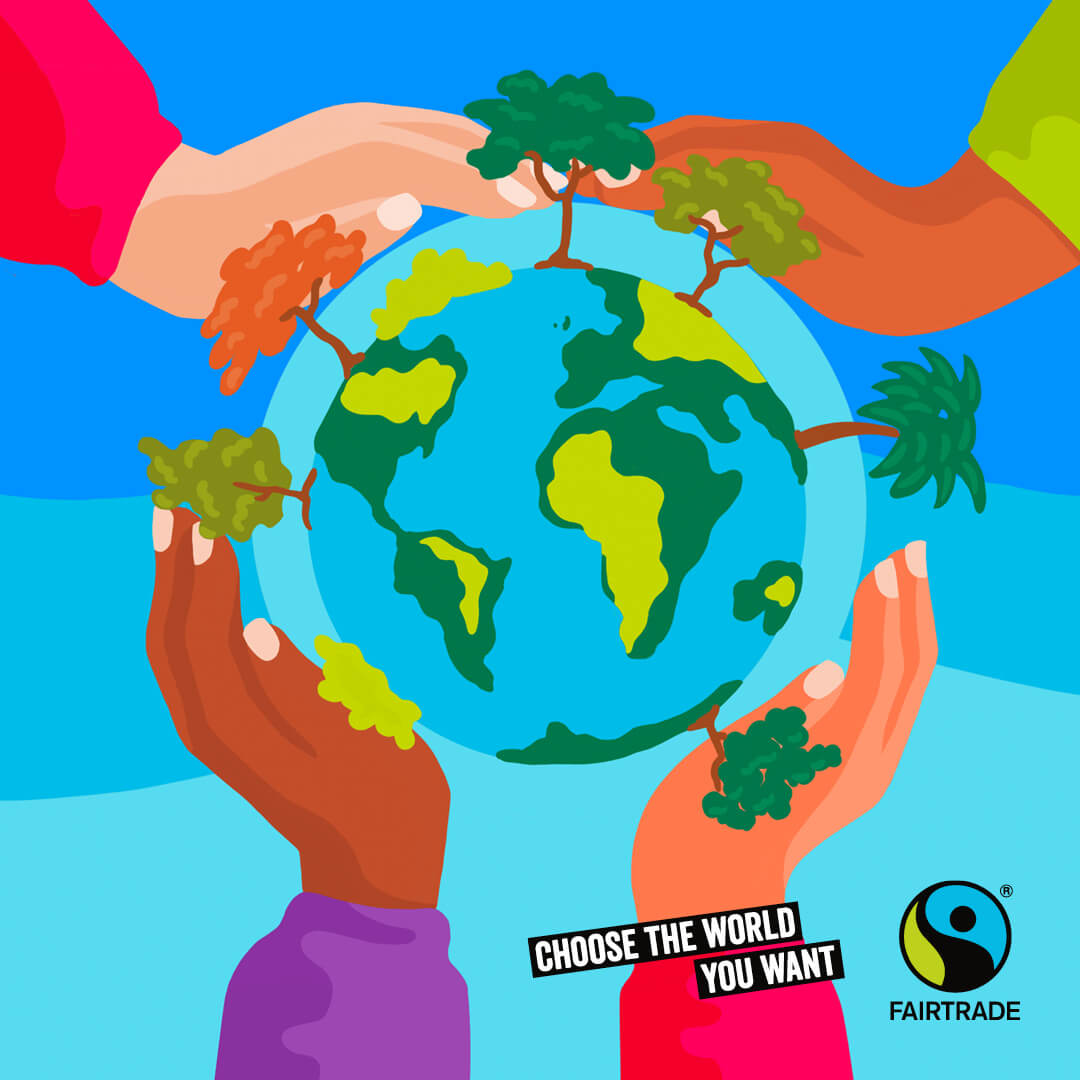 It’s Fairtrade Fortnight 2022 between 21st February and 6th March. Here’s you can get involved to support Fairtrade now and into the future.

Why does choosing Fairtrade matter?

Our trading system is weighted against low-income farmers. The prices paid for the crops behind some of our favourite foods need to increase significantly in order for farmers to escape the cycle of poverty and still have the means to adapt climate emergencies. Now more than ever, they need fair pay, fair prices and fairer trading practices.

For generations, the exploitation of people and planet has caused extreme global inequality and a climate emergency. Fairtrade farmers have told us that climate change is their biggest challenge right now. They are bearing the brunt of the climate crisis in the most climate vulnerable nations. Despite contributing the least to the climate crisis, smallholders in developing countries are disproportionately affected by increasingly frequent weather events, loss of fertile soil and crop diseases.

The farmers that Fairtrade works with have seen their crops of coffee, cocoa, honey, and vegetables in Honduras, Guatemala and Nicaragua be completely devastated. At 1.1 degrees, current levels of global heating are causing communities to suffer hurricanes in Central America, floods and landslides in India, sweeping away people’s homes, destroying entire livelihoods in seconds, while swarms of locusts affect East Africa and extreme drought continues in Southern Africa. By 2050 as much as 50 percent of the global surface area currently used for coffee farming may no longer be suitable and many cocoa growing regions in Ghana and Côte d’Ivoire – who produce over half of the world’s cocoa – will become too hot to grow the crop.

Farmers have fewer resources to adapt to changes in climate and other stresses they are experiencing every day. Yet we all rely on farmers to produce the food we need for a growing global population. 80 percent of the world’s food comes from 500 million family farms. With the continuing global COVID-19 pandemic, these communities also face rising debts, falling commodity prices and widespread shocks in the global supply chains. These huge challenges, alongside already low incomes, mean these communities are often unable to invest in ways to adapt to the widespread effects of a changing climate, let alone clean energy and climate-smart farming methods needed to protect the planet’s forests and help restore biodiversity.

What can you do during Fairtrade Fortnight 2022?

Choosing Fairtrade is one simple decision UK shoppers and businesses can make to stand with farmers and workers on the frontline of the climate crisis. Fairtrade works with farmers to strengthen environmental and climate protection, to provide resources, training and knowledge so they can face climate challenges right now.

It’s up to all of us – citizens, farmers, workers, businesses, and civil society organisations to come together to play our part in cutting emissions and build pressure for climate promises to be delivered at COP27 next year. Join us in Fairtrade Fortnight 2022 to show support for those who depend on the land – farmers, workers, miners – and join their outraged voices, by sharing their concerns and campaigning to achieve the change we want to see for the planet. Fairtrade Fortnight 2022’s Choose the World You Want festival, will continue to amplify the voices of farmers and workers, the steps they are already taking to fight the climate crisis, and highlight the role of businesses, shoppers, governments and citizens in supporting them to win the fairer future that we all know they deserve. 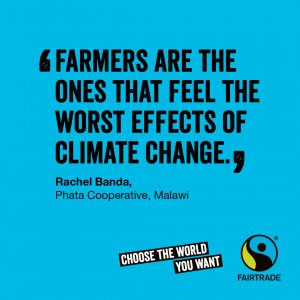 Fairtrade’s Choose the World You Want Festival returns for a second year for Fairtrade Fortnight 2022. It features a series of virtual events designed toengage, inform and educate people around the urgent message of Fairtrade and climate change, the future of our food and those who produce it. The online initiative will bring the Fairtrade movement together and feature panel discussions, performances, workshops and collaborations between the Fairtrade Foundation and retailers, chefs and high–profile names in the world of food and sustainability.

Fairtrade Plymouth: what to watch out for

Here in Plymouth, Fairtrade Plymouth (via Food Plymouth) and Plymouth City Council have teamed up to run a special social media campaign, raising awareness of Fairtrade success stories across the city. Look out for #FairtradePlymouth and #FairtradeFortnight on social media to learn about what different Plymouth enterprises are doing to support Fairtrade in their work. You can also share your own stories of supporting Fairtrade at home, work or school using the same hashtags and tagging @PlymouthCityCouncil, @FairtradePlymouth (Facebook only) and @FoodPlymouth.

Keep an eye on the dedicated Fairtrade Plymouth Facebook page for news of events and activites you can get involved in across the fortnight, including a Fairtrade Coffee Morning at Plymouth Unitarian Church on Wednesday 2nd March. Take a look back at Plymouth’s Fairtrade Fortnight activities from 2021 too, with some easy peasy cook-along videos featuring fantastic Fairtrade ingredients, produced in collaboration with Food is Fun CIC, the Coop, and Plymouth City Council.

What can you do beyond Fairtrade Fortnight?

If you’re a business owner, consider signing up to the new Fairtrade Climate Pledge and Climate Network and be supported in your Fairtrade journey.

The Fairtrade Climate Network is a forum bringing together committed businesses to accelerate action to face the climate crisis and build sustainable supply chains in which farmers are supported to adapt to and mitigate climate change. Through quarterly forums, we will facilitate learning from farmers, sustainability experts, and industry peers, and connect and enable collaboration between businesses facing similar challenges to increase our collective impact.

By joining the Fairtrade Climate Network you will:

As an individual, if you’re able to, make an active choice to support Fairtrade whenever you shop. The Buying Fairtrade page of the Fairtrade Foundation website is an excellent place to learn where to source everything from Fairtrade bananas, coffee, chocolate and wine to Fairtrade jewellery, clothes and flowers.

About Fairtrade: the Fairtrade Mark and Fairtrade Standards

Fairtrade changes the way trade works through better prices, decent working conditions, and a fairer deal for farmers and workers in low–income countries.Fairtrade International is an independent non–profit organization representing 1.9 million small–scale farmers and workers worldwide. It owns the FAIRTRADE Mark, a registered trademark of Fairtrade that appears on more than 37,000 products. Beyond certification, Fairtrade International and its member organizations empower producers, partner with businesses, engage consumers, and advocate for a fair and sustainable future.

Fairtrade is committed to fighting the climate crisis. Fairtrade Standards encourage producers to protect the environment by improving soil, planting trees, conserving water and avoiding pesticides, while Fairtrade’s programmes include climate academies for farmers to share best practice. At the same time, Fairtrade makes training available to producers so that they can use the latest agricultural methods, such as intercropping and shade–grown coffee to adapt to conditions.

The FAIRTRADE Mark on a product means that the Fairtrade ingredients in that produce have been independently verified by FLOCERT, an independent certifier accredited by the International Organization for Standardization (ISO). FLOCERT can and do suspend or, in some cases, even decertify Fairtrade producer organisations if their audit shows that Fairtrade Standards are not being complied with.